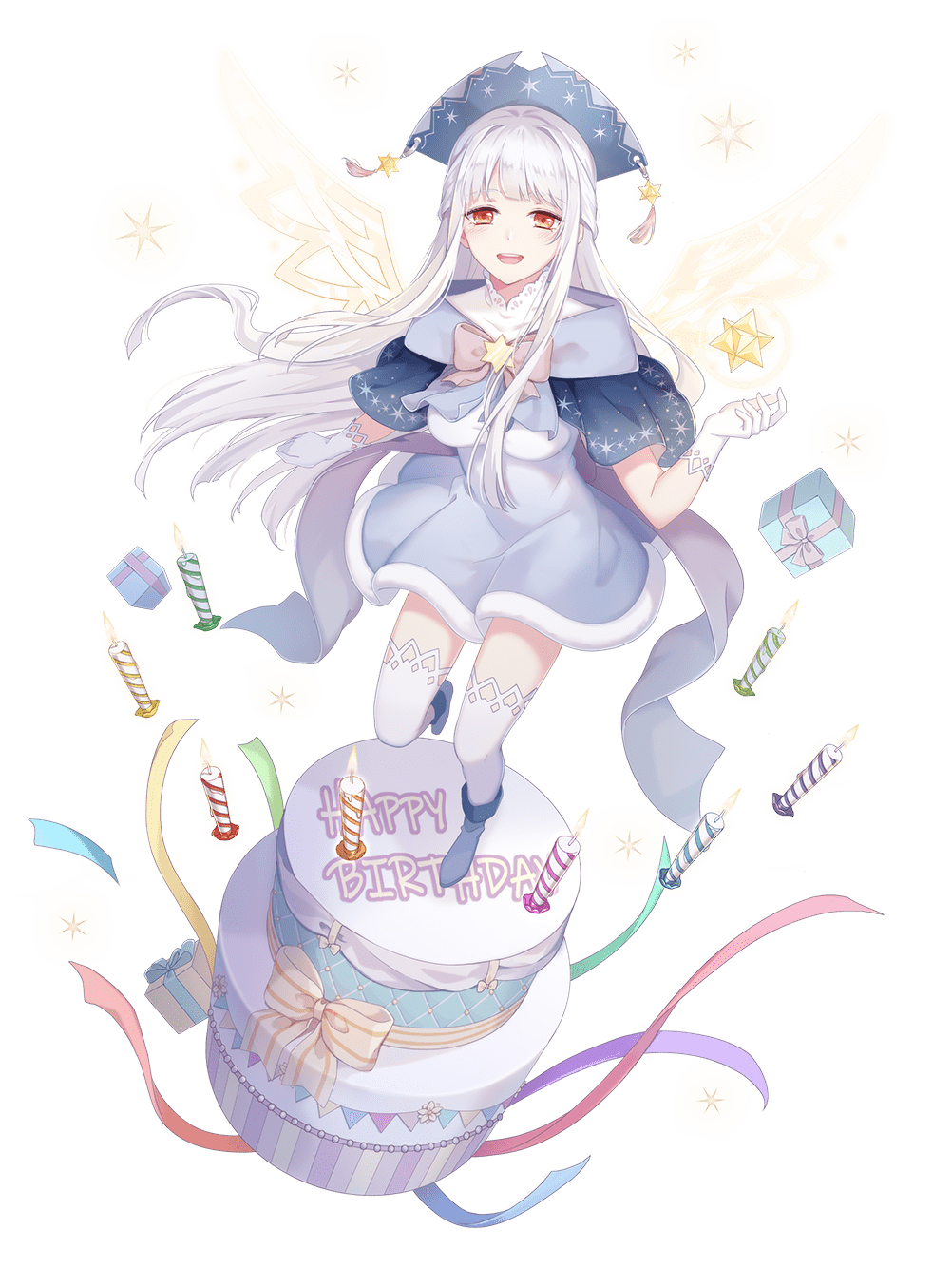 ● Fondant’s Energy and Linked Skill heal the entire team for a good amount. In terms of raw healing, her Linked Skill is second only to Milt’s own Linked Skill, and even her Energy Skill is significantly stronger than Sweet Tofu’s.
● While very niche, her basic skill also grants all allies immunity to Charm for 8 seconds, which can be useful in Showdown against Foie Gras. More importantly, it is crucial against a future Disaster Boss that can charm your entire team!
● Fondant has a mutual link with Champagne, a very powerful UR DPS. The link also allows you to control Champagne’s Linked Skill, which is the cornerstone of one of the strategies that can be used against Durga.

● Fondant’s basic skill heals a lot for a basic skill, but does so in small doses over a long period of time. Not a huge problem overall.
● Fondant is only available during event summons, making her exceptionally hard to even obtain, much less ascend.
● Fondant’s skills may be good, but her status as an SR means that her stats will leave much to be desired. She doesn’t have access to an Artifact to alleviate this issue either, whereas her closest competitor Sweet Tofu does.
● While she has good healing output, Fondant does not offer damage or crowd control, and thus is not recommended for most content later on.

● Vs. Sweet Tofu
Sweet Tofu has long been renowned as the best general use SR healer, so this comparison is only natural. As far as stats and skills are concerned, Fondant can be said to be the better healer, though not by a huge margin. However, Sweet Tofu is far easier to ascend and also has an Artifact. While it’s not strong enough to heavily invest in, having the option is better than nothing, and it widens the gap between them as long as Fondant has a lower ★ level. Therefore, in most situations, it is recommended to simply use Sweet Tofu.

However, her advantage lies in her far stronger Energy Skill, her mutual link with Champagne, as well as her ability to grant Charm immunity! If both parties are at 5★, Sweet Tofu’s only saving grace would be the unique effects his Artifact grants him. Fortunately for him and unfortunately for her, it’ll be hard to ever get Fondant to 5★…

● Vs. Cloud Tea
The only reason there’s a comparison with Cloud Tea here is because some of you may have heard about Cloud’s Artifact allowing her to grant Charm immunity, and Silence immunity too! It’s true, but there’s a problem with that. The Charm immunity ability is in Cloud’s 5th Togi Node, which requires a total of 2734 Energy to unlock. That’s at least an average of 900 UR Trial Tickets, which amounts to over 144,000 crystals. Yikes.

Cloud’s Silence immunity ability is far cheaper, requiring 664 Energy, an average of more than 200 UR Trial Tickets, which still clocks in at over 32,000 crystals. Even as dandy as Silence immunity is, however, it’s not Charm immunity. Therefore, unless you can whale all out on Cloud’s Artifact, Fondant still remains the best choice for your Charm immunity needs.

Fondant Cake is a good investment especially if you have a high ★ Champagne. She’s also crucial against a particular Disaster Boss that will come in the (very far) future. Her healing is generally better than Sweet Tofu’s, though being locked to summon events makes it challenging to ascend her.

Fondant is the second best general healer in the game after Milt, but is held back by her limited availability. A healer is still a healer, however, and in most cases, Sweet Tofu can do the job well enough anyway. So for the time being, at the end of the day, having Fondant is simply icing on the cake.