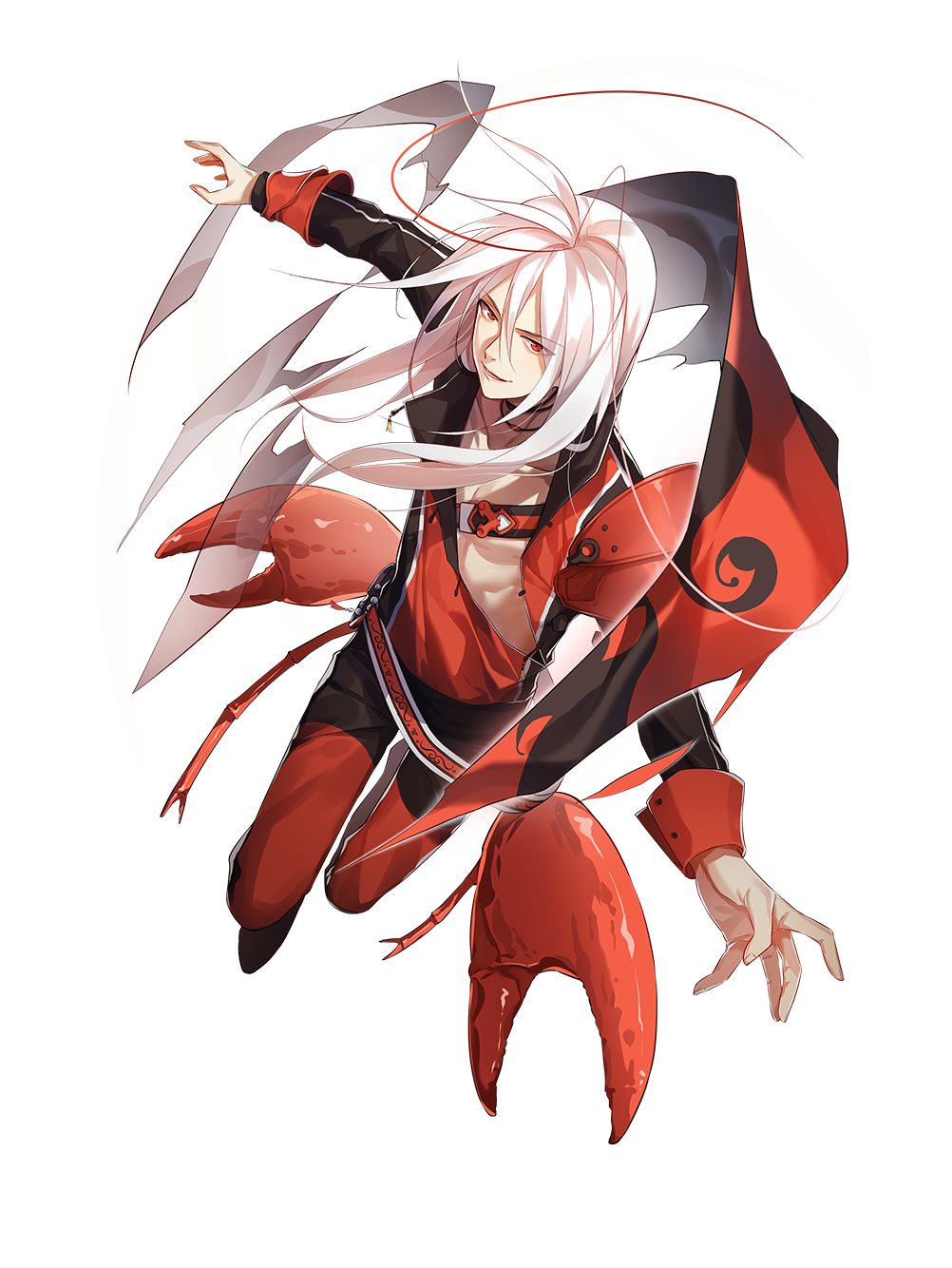 I finally killed my enemy.

I almost forgot. I already escaped the laboratory… For as long as I could remember, I didn’t even know who I was. When they told me I carried the fate of humanity on my shoulders, I firmly believed that was my purpose as a Food Soul. But before anything, in order for more of my brothers and sisters to be born, I had to be experimented on to make sure we could get along with humans.

The process was agonizing, but I endured it. More and more of my brothers and sisters were born in the laboratory.

That day, for the final experiment, we were taken into a large yet hidden room. The test was...for us to kill each other.

For the first time in my life, I disobeyed human orders. This was one test I was not willing to endure. Confused, I instead tore down the room’s double doors, and that was when I heard humans shouting from outside.

“...The subject has started resisting. It’s as we feared...they’ve developed emotions.”

A strange sound rang throughout the room. Suddenly, I lost all my strength and collapsed. The experiment was put on hold, and I was dragged back to my room. I could see the disappointment in their eyes as they took me away.

Will humanity be disappointed in me if I don’t kill my brothers and sisters? Why?

...I probably wouldn’t have found an answer if I stayed there. Because after that, no one ever stopped by my room again. It became eerily quiet.

I escaped from the laboratory. From then on, a desolate forest became my shelter, and a damp cave my new home. Whenever I ran into a Fallen Angel, I’d kill them before realizing it. I still remembered that was my purpose. At first, I’d count each day of my freedom, but eventually grew bored and stopped.

The only remarkable thing that happened during that time was when I came across a young human adult from the outside world and befriended him. Sometime after that, his descendant paid me a visit. Only then did I learn that man had died more than two hundred years ago.

Time never stopped. Only my aimlessness remained the same.

His descendant told me what era it was and what was going on in the outside world. My siblings and I had been named “Food Souls”, and thanks to some sort of restraint they’ve become as tame as possible. Completely obedient, even. More and more people could summon a Food Soul to combat Fallen Angels, and they formed an organization dedicated to them too. It seemed as though humans finally had a hope of escaping extinction—which meant that they went through with that final experiment anyways.

“It’s been more than two hundred years since my ancestor first met you, hasn’t it? Have you never thought about leaving?”

I didn’t know how to reply. This world wasn’t mine. It didn’t belong to us Food Souls, so going anywhere would be useless. It didn’t sound like a bad idea to stay in this forest until I disappeared someday.

Friend, huh... I don’t know what that means, but it for some reason it makes me feel kind of happy. Perhaps there’s a lot more to living than I thought. I don’t know.

After that, he’d send people to bring books for me to read, and I learned a lot. We eventually became close friends. Unfortunately, good times never last. Something happened. I knew he was from an aristocratic family of a country named Gloriville, but he was in danger.

“The king is a cruel tyrant. I thought I could change him, but he put a death sentence on my head. I’m afraid...I won’t be alive for much longer.”

“Aren’t you going to rebel?”

“This is my fate. If my death can help the king realize what he’s doing, it will be worth it.”

There was no way I’d let anyone hurt my friend. I promised I would protect him and let him stay at my place, despite his insistence we were just stalling for time.

It didn’t take long for the king to find this place and send people after us.

Even though I prepared myself, when push came to shove, it still pained me to no end---the ones I was fighting were my brothers and sisters.

“What are you doing? Why must you obey their orders and kill?”

I tried to reason with them but got no straight answers. The only words that came out of their mouths was a flat “According to the contract, he must die.”

Contract? Was that the “restraint” my friend told me about?

“Whatever that is, can’t you stop and think about what you’re doing?”

No matter what I said, I couldn’t get to them. The Food Souls, whom I saw as my dear brothers and sisters, were already attacking.

I escaped from the laboratory to avoid this. I swore to quietly disappear and say goodbye to this world forever. But cruel fate made my deepest fear come true. I killed everyone who attacked us. It didn’t matter if they were human or Food Soul, I killed them all…

I was livid. Food Souls had given humans the hope of survival, but what did humans ever do for us? Holding back the fire raging in my chest, I saw him quietly arrive at my side.

“....” “Boston...you shouldn’t do this much for me…” “Shut up...at least...at least tell me it was worth it…” “You could never imagine the obsession humans have with fighting. You may have protected me this time, but the next, they’ll come back even stronger.” “So I did that for nothing?!” “Take me, for instance. I was born to carry out my fate--to bring peace to Gloriville. That’s what I fight for. If you want something to fight for, it cannot be me. But when you finally decide on something, my descendants shall aid you in your conquest.”

He thanked me but decided to return to Gloriville. In his eyes, only his life could end it all. I desperately wanted to do more for him, but when his son brought news of his death, my heart began to turn cold.

“My family shed blood, tears, and sweat for our kingdom. It’s all thanks to that idiot king that things turned out this way. But I won’t be as nice as my dad was. I was hoping you could lend me a hand!”

The year after, his son sent a messenger to tell me that his family staged an uprising and dethroned the king. I followed through with my end of the deal and finished the king’s son and his squad off while they were out hunting in the forest. Evil disappeared from this world without a sound.

Upon learning that his family supported the new king onto the throne and completely took power, I finally realized my own mission.

The next time I saw one of my friend’s descendants was almost three hundred years later. “Are you Boston Lobster? The rumors are one thing, but seeing you in person is quite another. Our family is truly in your debt.”

“Are you that man’s descendant? It’s been so long that I almost forgot about you all.”

“No, I’m a relative of that man’s descendants, but part of the family all the same...I came looking for you because of a plan I’d like to ask your help with.”

“Is that so? What a coincidence, I have something I need your help with too.”

“Wonderful. My ancestor passed down an instruction: as long as you’ve found a something to fight for, our family will do everything in our power to help you.”

Yes, that was our oath.

For hundreds of years, humans have thought of nothing but themselves. To them, my brothers and sisters are just tools, sacrifices. I must change this reality. That is my true purpose.

“If I may ask, is there something you want to accomplish?”

“Heheheh, nothing big, it’ll just take a bit of time…”

Year 31: The “Contract” finishes development and moves into the testing phase. A food with a milder temperament has been chosen as subject 2. “Contract” implementation was a success and completed every aspect of the original objective.

Year 44: Subject 2’s form began to collapse due to continuous experimentation. As the objective was completed, it has been proposed that the subject is destroyed.

Year 56: The weapons have officially been named “Food Souls”, and a board has been elected to regulate them.

Year 233: An uprising occurs in Gloriville. King Karl VII is dethroned, and his descendant was mysteriously killed in Secret Forest. A survivor said he saw a red Food Soul on site.

Humanity held high hopes for him, yet he brought them endless pain for that same reason. That year, thanks to his friend, he was no longer aimless. He was no longer content with hiding in the forest, curled up in a damp cave. His fate and what he fought for was finally clear.

If humans couldn’t give Food Souls a wonderful world, he’d carve it out with his own hands.