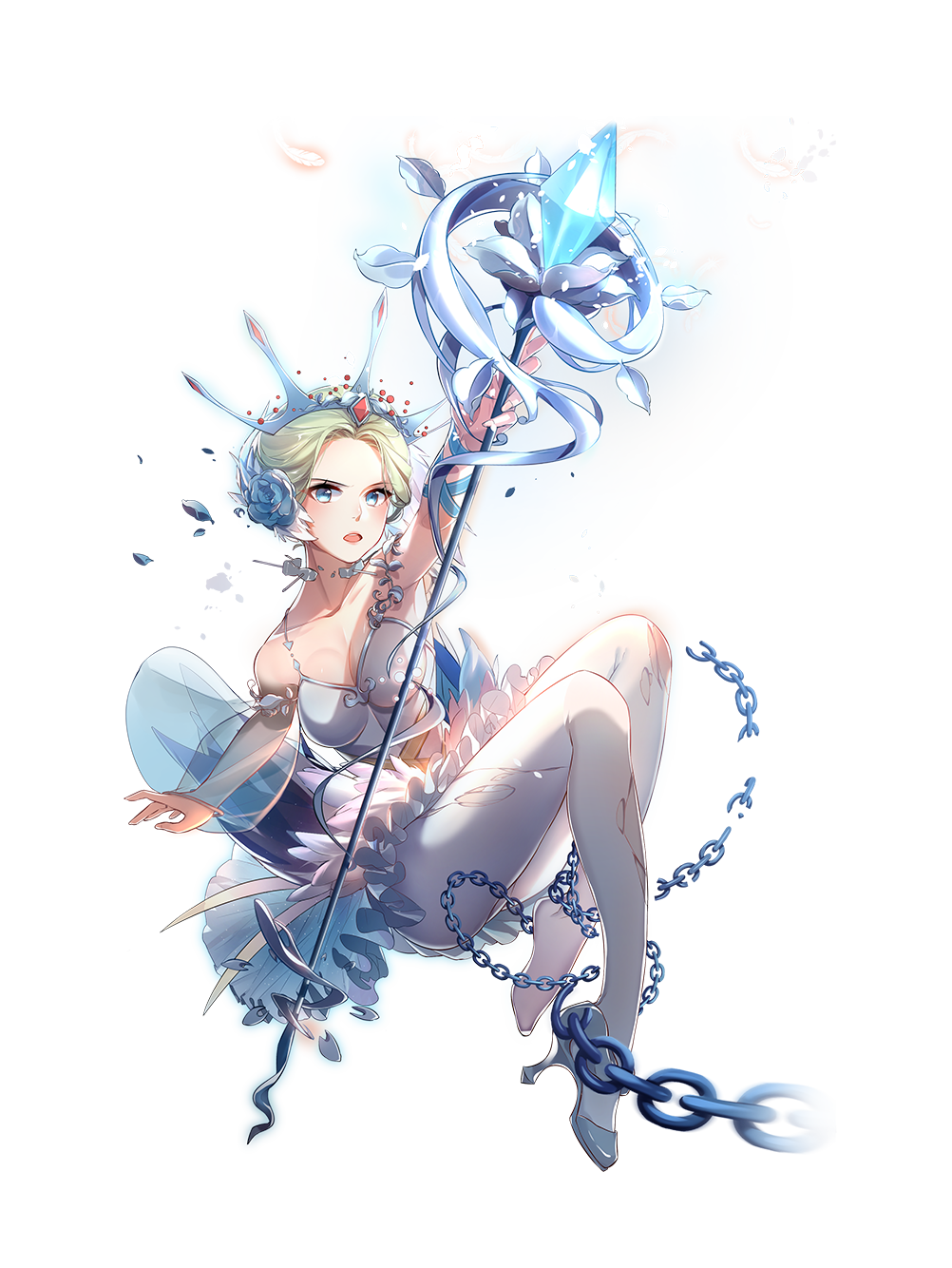 A four-walled room with only one window from which to look upon the landscape. Despite the azure skies and starry nights, the scene was imperfect. It was broken up into pieces by thin, long shadows. Iron bars installed on the windows.

When I walked, the sound of chains being dragged along the floor would echo around the quiet room.

Living day after day without a purpose, I'm not even aware of the passage of time in this cold room. Whenever I was bored, I would think back to the reason for my imprisonment.

Every time I thought about it, contempt for myself welled up inside of me.

It was a period in my life which I have mixed feelings about.

When I was first summoned into this world, the person who stood before me was a chef working in a castle. He seemed particularly surprised to see me and kept muttering "How is this possible... Do I really have this potential..." It grated on my nerves.

I wasn't sure why, but from the moment I knew he was a chef, a strange feeling of aversion towards him began building in my heart.

So, I had the utmost negative impression of him from our very first meeting.

Technically, I should be addressing him as "Sir Master Attendant" but I didn't want to.

He did not care how others called him either. People around him were always calling him "Chefie".

I just called him 'Hey'.

It was amusing to see Chefie scratching his head and scowling impatiently as he paced back and forth in his prison cell.

"How am I a rebel? I don't even have the time to complete my chores..."

No matter how loud he wailed, no one would open the heavy iron doors for him.

The royals were just using 'rebel' as a pretext to detain him. Perhaps the real reason was because they could not accept the fact that an insignificant chef could summon a food soul.

He stopped in his tracks when I called.

"I don't like this claustrophobic environment, so I'm leaving."

His words trailed off when he noticed that I had frozen the chains on my feet and smashed them to bits. I walked to the window and broke the iron bars too.

Chefie stood dumbfounded as he watched me, remaining speechless throughout.

When I was about to step out of the window, he pulled me. There was an anxious expression on his face.

"Miss... Miss Foie Gras, please take me with you!"

He is a man devoid of principles.

That moment when we escaped from the prison together, was the first time I touched a human...

Until now, the warmth still seemed to linger on my fingers.

I knew from the beginning that he was a weak man.

Toiling in his messy kitchen everyday, he was the butt of the conceited nobles' jokes due to his poor family background. Even his colleagues would offload the more tiring and tedious work onto him.

Nonetheless, he takes it all in his stride with a silly laugh.

However, he would replace his flippant expression with a serious demeanor whenever cooking is concerned. If he fails in making a certain dish, he would be extremely upset and stricter with himself the following day.

When I asked him about it, he answered "If I don't take cooking seriously, isn't it a disrespect to the souls of the ingredients?"

Maybe it was his serious countenance or the matter-of-fact tone in his voice, but from that moment, I started seeing him in a new light...

Which brings us back to our current situation. Word of our escape had gotten out, But the royal family was well-prepared for such contingencies and had an entire army lying in ambush.

I stood before the multitudinous soldiers, preventing anyone from hurting him. As long as he gave the order, I am willing to get blood on my hands just to get him out of here.

But the voice behind me said something that I didn't want to hear.

His voice sounded so calm and relaxed, as if he was talking about the weather.

"I have no friends or family. So to have you by my side everyday, I'm really happy."

I didn't say anything, and I didn't want to turn around to see the expression on his face. An icy cold feeling started to spread in my heart.

My body went stiff. He cannot... must not say those words.

Yet, I still hear them.

"That's an order from your Master Attendant."

In the heavily fortified castle, a shrill sound suddenly rang out and penetrated through the cold walls. It pulled me out of my reverie, snapping me back into the present.

I could vaguely hear the soldiers shouting.

“Could it be an enemy invasion?”

I sat on the chair in the middle of the room, lost in thought.

“Perhaps someone will come and send me out to battle.”

The sound of the iron door unlocking behind me reverberated throughout the room.

I turned around as the door opened. The person standing before me was not an armored soldier, but a blond teenager with an expression of passive indolence.

Without waiting for me to enquire the obvious, he simple volunteered the information upfront.

My body froze in shock. Though it was my first time meeting this young chap, I knew who ‘he’ referred to.

My eyes grew wet with tears.

“That’s an order from your Master Attendant.”

“So?”
I answered with an air of complete indifference, still not turning around to look at him.

I had expected such an outcome, because my Master Attendant was a weak man. He would never order me to get him out of here and kill everyone else.

I’ve realized it a long time ago.

Without waiting for his reply, I used my psychic powers to build a safety net around him, both to protect and trap him there.

I took flight and soared towards the enemy’s stronghold, where the King lived. After freezing all the soldiers around the King, I stared down at him. He appeared to have been expecting me.

“Guarantee his safety and let him live a life outside this country, and I will stay to serve you.”

The King promised repeatedly. He knew that if it weren’t for the covenant between Chefie and I, nothing could have contained me. The cunning King had everything planned out right from the beginning.

When I returned to Chefie, his eyes were red from crying.

I raised a hand to release the safety net. He rushed towards me, but was immediately stopped by the soldiers.

With his teeth clenched and his cheeks flushed red, he stared silently at me with an expression that I had never seen before.

"Go."
Leaving him with that, I turned away and prepared to return to the King.

But then, he shouted for me to stop. His voice, raw with emotion, stopped me in my tracks.

"Wait for me. I will come back for you."

I turned around and smiled at him.

When Foie Gras was first summoned to the human world, her heart was filled with a deep sense of revulsion for the chef.

Even Foie Gras herself could not understand the reason behind those strong emotions. Since she couldn’t understand and was powerless against resisting it, she chalked it up to ‘fate’.

However, it was the duty of a food soul to be by her Master Attendant’s side, so she had to endure the deep sense of disgust each day to fulfill her mission.

After spending some time with her Master Attendant, she came to a conclusion.

“My Master Attendant is a useless good-for-nothing.”

He doesn’t have any talent and his culinary skills are mediocre at best. Not realizing that he is being taken advantage of, he even takes on tasks that were not assigned to him.

Nonetheless, he was the only one in the stony castle who had respect for food, handling every ingredient with the utmost care.

Seeing him like this, the negative feelings in her heart began to gradually dissipate. Foie Gras couldn't help thinking that perhaps one day, he would become a great chef.

She felt like her 'destiny' could change with his very existence.
So eventually, in the face of such a cruel world, Foie Gras chose to give up her time in exchange for his release from his destined death.

"Wait for me. I will come back for you."

Those words became the only consolation Foie Gras would ever get in 30 long years.

She never expected him to keep his promise. It was a miracle that he had even summoned her in the first place.

Without the help of a food soul, he didn't have the power to save her.

Yet, the promise made by her Master Attendant remained close to her heart.

A blond teenager appeared before her now, offering his hand and claiming to take her away.

Foie Gras could almost see her Master Attendant standing behind the boy, grinning sheepishly while ruffling the back of his own head.

"Sorry to have kept you waiting."

"That's ok," Foie Gras replied. "I knew you would come back."