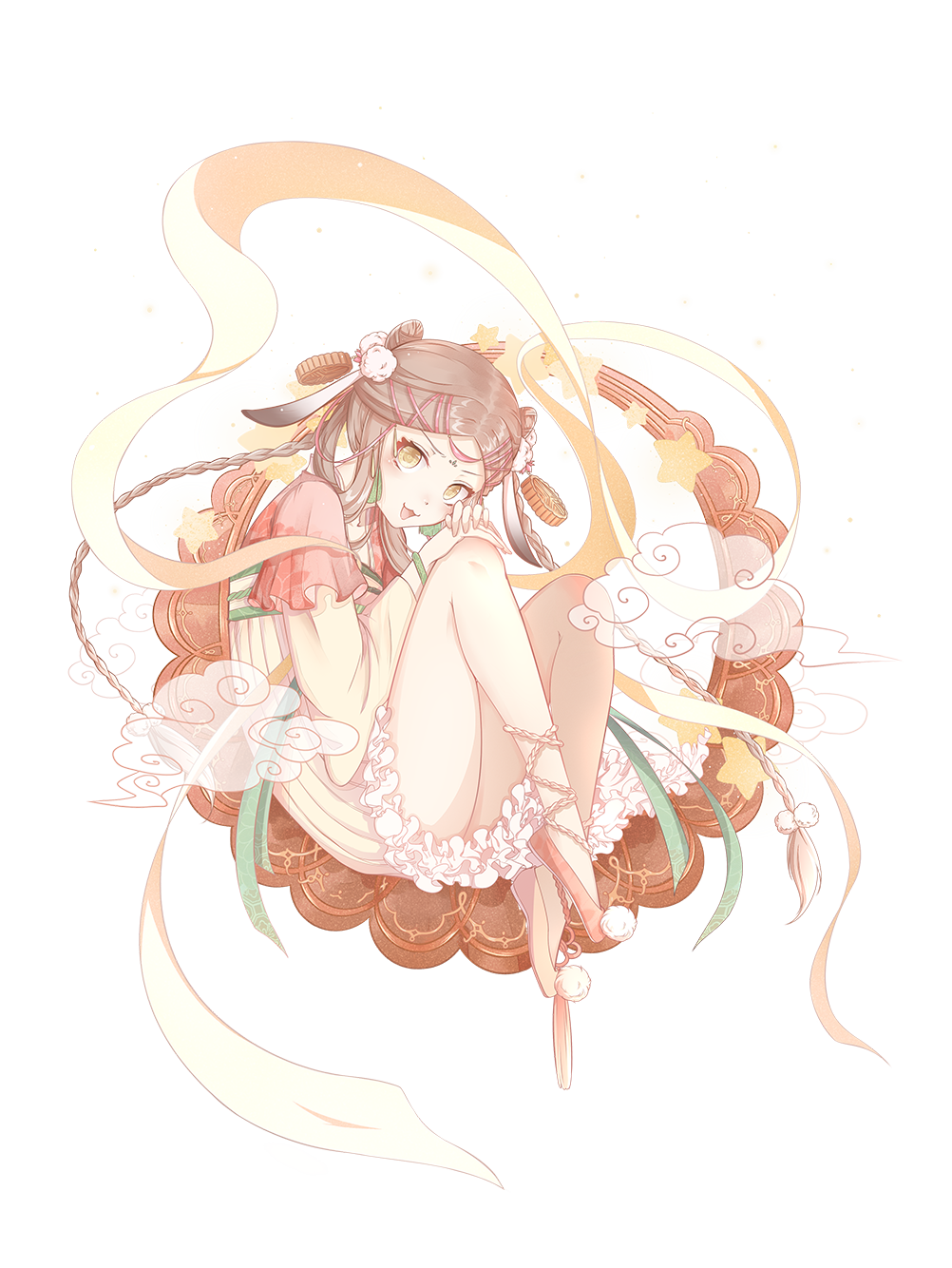 "The Mid-Autumn Festival, a time for togetherness..."

"Admiring the osmanthus blossoms, giving homage to the full moon..."

"How dreadful, let's run away!"

"Who are you calling a monster!"

After chasing away the children who had been making a ruckus under my tree, I took a deep breath through my nose even though it's almost frozen in the cold wind, and returned to the tree.

Half leaning against the tree, I gazed up at the brilliant full moon and took another sip from the wine cup I had set aside.

The words the children had been chanting unconsciously slipped through my lips. After finishing off my cup of osmanthus wine with a gulp, I muttered discontentedly, "Hmph, what kind of a person writes tripe like that?"

"That's right, the only lonely solitary soul tonight is me!"

I roar in utter frustration, but the only response was the rustle of leaves on the wind.

The wine was starting to get to my head, so I squinted my eyes and lay down.

The bright moon was still hanging overhead, watching me.

It felt like my vision was beginning to blur.

Drowsiness overcame me, and I sank into a deep sleep.

I had been engrossed in my work, so the sudden appearance of my Master Attendant's voice gave me a fright. When I raised my head, sure enough he had returned from his business.

I covered my guilty conscience with a smile and tried to hide the object on the table in my sleeve before he noticed.

My Master Attendant has been my "victim" one too many times though, and with one long stride he stood in front of me, from where he had a clear view of what was on the table.

"I figured I'd come home early and see what you were getting up to."

"How can you spend your entire day coming up with new tricks to play on people?"

Even though he didn't look happy, there was still a hint of affection in his voice as he told me off.

I'm safe. I relaxed on the inside and immediately replied, "Hee hee, it's so dull being cooped up in here, so I like to come up with ways to surprise you~"

"I'm just thankful you don't try to scare me."

He covered his face with his palm and sighed.

I stuck out my tongue and quickly hid the object on the table where he wouldn't be able to find it.

My Master Attendant was an unsophisticated man, and too serious.

When he summoned me, he took one long look and shook his head.

"How can I bring such a weak-looking girl to battle?"

Even though I proved that I wasn't just some weak little girl when we were attacked by a Fallen Angel soon afterwards, my Master Attendant just kept shaking his head like a bobble-head.

I spent every day roaming around this huge house waiting for my Master Attendant to return. After a while, I began to play little games that he called "pranks" to kill time.

Every day while I waited for him to return I would prepare different "surprises".

And each time, no matter how far I took things, he doesn't get angry and just helplessly cleaned up the remains of my mischief.

Soon, I discovered I really enjoy playing these tricks. A lot.

The next time my Master Attendant left, he was gone for a very long time.

The house had felt empty enough before, but now it seemed to magnify my loneliness.

I stood by the entrance and stared at the gravel path leading up to the house.

As I sank to my lowest point, I tried to recall everything my Master Attendant had said and done, trying to find something... anything that I might have overlooked.

But unfortunately I found nothing.

I had reached rock bottom. My face was buried between my knees when I heard the sound of approaching footsteps.

I immediately raised my head to gaze at the figure as it came closer, but soon realized that it wasn't my Master Attendant.

However, I did recognize the person. They had been here before and I thought it was one of his companions.

"My Master Attendant?" I asked when the person remained silent.

The full moon chose this moment to come out from behind a cloud, illuminating the night with its gentle light and giving me a good look at the bloodless face of the person in front of me.

My heart clenched as I urged him.

Suddenly the world fell silent, leaving only the sound of those words hanging in the air.

If the Master Attendant with whom I had made a contract was dead, then I should have felt the dissolution of that contract's force at the moment of his death.

But I still felt my Master Attendant's strength.

I whispered the name of my destination and quickened my pace.

I look at the snow-covered mountain before my eyes. It was so tall, its peak was shrouded by the clouds. Bit by bit, the cold wind sank deep into my bones and my teeth chattered so hard I could hardly speak.

According to my Master Attendant's companions, it was here upon this mountain that they lost contact.

"They never even found a body, how could they write him off as dead!"

Indignant, I took a step forward, promptly sinking deeply into the snow as I made my way towards the mountain.

I don't know how long I had walked.

But it didn't feel like I was getting any closer to the summit.

I didn't even dare look back to see how far I'd come for fear of giving up.

The cold wind whistled, one blast after another, until I thought the chill was going to swallow me whole.

But there was only one thought in my mind.

The thought wouldn't leave me alone.

"Strawberry, look. Is there someone there?"

"Whoa! It's a Food Soul! Let's hurry up and make sure they're alright!"

"I know, but be careful you don't slip too."

It felt like the cold had sapped all my strength. Just as I was about to lose consciousness, I saw two figures in the distance running in my direction.

I couldn't get the words out of my throat.

I watched the two figures draw nearer and nearer until my eyes closed in exhaustion.

In the year 300 of the King's Calendar, a Master Attendant in an ancient Light Kingdom town successfully summoned a Food Soul named Moon Cake.

However, this Master Attendant was stubborn and inflexible. When he saw that the Food Soul he had summoned forth turned out to be a little girl, he was unwilling to let her participate in the cruelty of war.

So Moon Cake spent her days at home, awaiting her Master Attendant's return.

One monotonous day after another, she began playing pranks on others to add a bit of fun to her life.

Through these pranks, she discovered that even though her Master Attendant was obstinate, he was also a nice person with a tender soul.

Moon Cake's bland days were interspersed with laughter and gradually her heart, once lonely with waiting, became full.

However, her happy days came to a screeching halt when she heard the news of his death.

Unable to believe her ears, Moon Cake arrived at the place where he had disappeared, looking for hope.

She lost consciousness along the way and was rescued by two passing Food Souls.

When she came to, she saw her Master Attendant frozen in a block of ice.

That stubbornly nice man. He had given his life here on this frigid mountain to protect a Food Soul.

Moon Cake muttered the question while she gazed at the figure she had sought for day and night.

Moon Cake said with a smile even as tears welled up in her eyes.

With a loud "CRACK", the ice block holding the Master Attendant shattered into pieces and Moon Cake caught her Master Attendant as he fell forward. She felt the force of her contract, its disappearance delayed by the ice, fade away.

She brought the Master Attendant back to the house where they had lived happily together.

In the years that followed, the once bustling home remained silent, except during the Mid-Autumn Festival.

That was the sound of Moon Cake returning to celebrate the holiday.