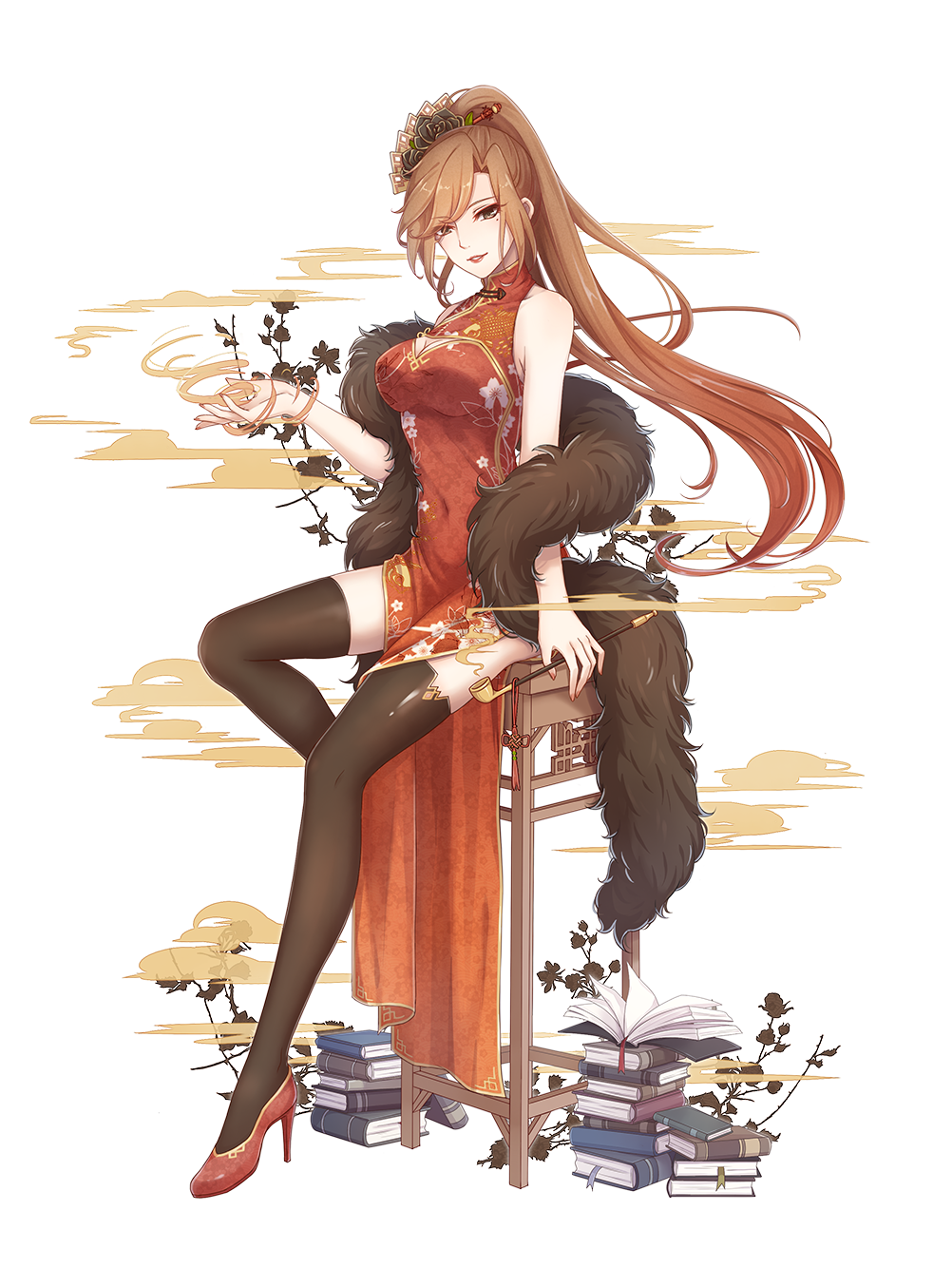 This is a well-known proverb among the humans.

And it was the last thing my Master Attendant said to me before he died.

I looked at the black book before me. The initial eagerness to open it right away turned into hesitation.

The smell of musty dampness filled the dark and dirty basement, and the light of the oil lamp I had brought with me gave out a weak glow.

I told myself that there was no time to hesitate. The troops might catch up with me soon and the ‘truth’ that I had been searching my whole life is right before me.

"Touch it, open it, and then remember it all. This is my duty as a historian."

But my hands could not stop shaking. The missing pieces in the historical annals sent a sudden trace of fear through my body. The familiar history was like a giant python twisting itself around my entire body and breathing down my neck.

My Master Attendant's warning echoed in my ears again. I still vaguely remembered the look in his eyes when he knew that death was drawing near.

It was just as if he had known all along that I had disobeyed his orders. Listening to the curiosity in my heart and pursuing my thirst for the truth, I searched through all the historical annals I could lay my hands on and remembered every minute detail.

I lit the smoking pipe I had been carrying with me, took a deep breath, and blew the smoke out slowly. The smell of tobacco mingled with the damp air. I felt my frayed nerves begin to relax.

Once again, I reached out my hand to touch the black history book. Just as I was about to flip open the book, someone stepped in through the back door.

A sense of oppression swept into the room. I quickly extinguished the pipe and hid behind the bookshelves.

I heard unhurried footsteps pacing around the room and eventually coming to a stop in front of the wooden chair where I had just been. Then, the deep voice of a man.

This nation has neither a large population nor an advantageous geographical location, but it is extremely wealthy and their people were able to lead comfortable lives.

So it is not surprising that the outside world would grow suspicious.

Many people were sent from other countries to investigate the nation, but no one ever returned.

I supposed that the "reason" for this was at that moment making his way to where I was hiding. He found me behind the bookshelves.

"Ah! Just as I thought, you were after the historical records."

He relaxed into the wooden chair where I had been sitting a while ago and spoke to me in a causal tone. Then, he started flipping open the book that I hadn’t dare to touch.

"It appears you haven't opened it yet."

His voice carried a hint of mockery. He closed the book after thumbing through a couple of pages. I watched his movements through the gaps in the bookshelf. He took out a smoking pipe and lit it, not bothering to look in my direction at all.

I didn't dare to do anything rash. Breathing slowly, I prep myself for any sudden attacks. Suddenly, footsteps were heard outside the door and someone burst in.

The general who rushed into the room was furious. I realized he was the one who had been chasing me ever since the time I had snuck into the castle.

The proud-looking soldier was shocked at the sight of him. The smoke in the room was growing heavier by the second. Then an unimaginable scene unfolded right before my eyes.

The smoke in the air suddenly began to wrap itself around the incoming soldiers.

The soldiers began to fall one after another. The general’s face started turning red, as if someone was choking him. He pointed angrily at the man sitting in the chair and sputtered, "You..are a traitor..the King will..never forgive you!"

Following that, he fell silent and collapsed, joining the other soldiers on the ground.

This was a food soul whose powers were far greater than mine. My gaze was still fixated on what was happening when his voice called out beside me.

"Let's continue, shall we?"

The proverb that Master Attendant had imparted to me upon his death should have been transcribed onto a plaque, and worn around my neck at all times to serve as a reminder not to give in to my curiosity.

Too late for that now.

I held the black history book, and stood in the middle of the country, watching the entire kingdom burn. Explosions, shouts and cries for help echoed in my ears.

“I want you to witness how I’m going to destroy this country,” the Food Soul had told me while we were in the basement.

“And I want you to make a record of all of it, so that history will never forget.” He had given a chilling command without a change in his expression, as if he was merely contemplating what to have for breakfast tomorrow.

After the Food Soul left, I had quickly flipped through the black history book that I now held in my hands.

And now I wasn’t sure which was more cruel - the scene unfolding before me or the deeds that were recorded in the pages of the book.

The tragedy of that night continued unabated until dawn.

As the cleansing rays of the morning sun spilled onto this land, the wealthy and powerful nation was nothing more than a scattered and annihilated mess. The darkness lurking beneath the polished appearance of the city had been exposed and burnt into nothingness, along with the kingdom.

I stared at the Food Soul resting in the rubble. He must have used up all his spiritual power by now, but the expression on his face was as calm and composed as when he had spoken with me the other night.

After a battle like the one he had just fought, I knew he was probably so depleted of energy that he would never be able to wield that terrifying power to kill humans with mere spiritual pressure again.

It was a pyrrhic victory.

As the sun rose, its rays began to pass through me and my shadow on the ground slowly grew faint.

I looked down at my increasingly transparent body, and smiled in relief at being released from this burden.

When I was first summoned by Master Attendant, I was filled with an intense curiosity.

How was the world created? What kind of creature were human beings? What’s the purpose of a Food Soul?

My curiosity grew into an insatiable thirst for knowledge, and I found that history was able to provide some answers to my questions.

As a result, against my Master Attendant’s wishes, I buried myself in the history books of the various continents. Slowly, I began to realize that none of the histories of the different countries seemed to line up.

People attempted to explain these gaps in history by bringing in unrelated events. Yet, some patient analysis would have revealed that all of these explanations contained contradictory and fatal flaws.

After Master Attendant passed away, I found the key to the mystery.

Amidst the rubble, I watched my body fade away, enjoying the sensation of approaching death while reminiscing about my long life.

I had arrived on this world innocent and ignorant and would leave it burdened by the weight of the truths I was carrying. I had walked through countless experiences alone and knew better than to pass judgment on whether they were right or wrong. Right now, all I wanted to do was to close my eyes and fall into a deep sleep.

“So, this is what a Food Soul looks like when they’re about to disappear.”

The Food Soul, who ought to have been weakened to the point of immobility, was suddenly beside me. I could only stare at him in silence, as I no longer had the strength in me to say anything.

“I seem to recall you making me a promise that you would record everything, did you not?”

His voice was as warm as the morning sun, but I could not help feeling like he was teasing me. Surely, he must have realized, from my rapidly fading body, that I could no longer maintain my existence in this world. What was the point of bringing up that promise?

His next words nearly made me choke, were it still possible.

“So, there’s no way I can let you just disappear here. Since you agreed to my request, you must see it through.”

Before my stunned gaze, he pulled a strange shining rock from his breast. Staring fixedly into my eyes, he declared in a slow and clear voice:

“From today onwards, you will stay by my side and work for me.”

“This isn’t a request. This is an order.”

In Imperial Calendar Year 250, a man who served as historian to the wealthiest country in Light Kingdom disappeared under the cover of night and hid himself in a bamboo forest which was shrouded in thick fog.

He hid his life’s work in a dark and dirty underground room, where he was certain the people of his country would never find.

The days that followed were peaceful and lonely, until Yuxiang was summoned to his side.

He forbade her from reading any books that dealt with history. However, Yuxiang was curious by nature and was driven by a thirst for knowledge. Just like her Master Attendant, she soon familiarized herself with the history of the world.

However, she also discovered gaps in the history records where details have been deliberately removed.

In Imperial Calendar Year 270, the elderly historian passed away. Yuxiang was freed from her Contract and was finally able to attempt to search for an answer to the gaps in history. However, she was a naturally frail and weak Food Soul. Having lost the power of the Contract, her spiritual energy waned with every passing day.

In Imperial Calendar Year 300, Yuxiang manged to piece together sparse clues, and finally located the country where her Master Attendant had been employed as a historian. Perhaps she was fated to discover the underground room within which the historian had sealed his life’s work.

And so, the truths within the “Black History Book” were revealed before her eyes.

Knowing that she would not be alive for much longer, Yuxiang made the same decision the historian had made 50 years earlier.

She decided that the truth would be buried with her.

Yet, as she was dying, a Food Soul appeared before her and altered the course of her fate.

From that day onwards, she would serve as that Food Soul’s historian, accompanying him by his side.

“He extended my life without my permission”, was how Yuxiang always chose to explain the reason she’s always following him.

“As such, I have to stay by his side and figure out what he wants to do next.”