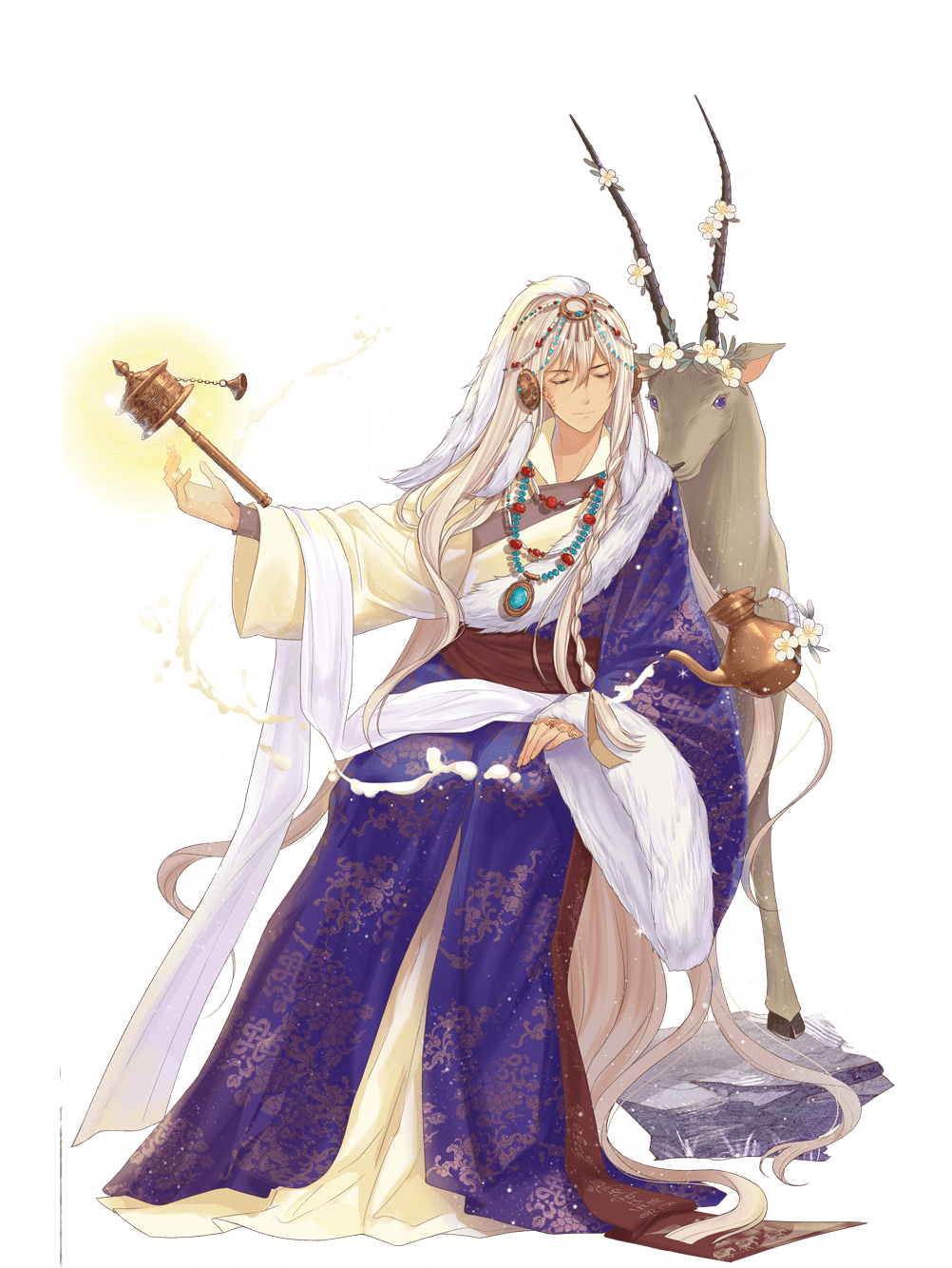 Strengths
● Decent AoE damage
● Basic skill dispels and has a strong Atk Spd buff
● Energy skill grants all allies, including himself, a lot of energy
● Very useful against Disaster bosses

● Butter Tea has a high Atk and Atk Spd stat, and his skills deal good damage by AoE skill standards.
● His basic skill dispels buffs from all enemies (including Invulnerability), as well as giving a whopping 20% Atk Spd buff to the team.
● His energy skill grants the entire team 50 Energy split over 5 seconds, effectively giving him a half-full Energy bar after every use!
● Disaster bosses possess powerful buffs that are important to remove, and the Energy Skills of your healer(s) are crucial for survival, which Butter Tea’s skills are perfectly suited for!

● He is effectively a stronger Toso and an AoE version of Rum.

● Butter Tea is only summonable in certain events, which makes him very hard to ascend.
● He cannot stun, charm or silence. Toso and Rum also share this weakness, however.
● Disaster fights only have a single enemy, so the AoE nature of his skills result in a DPS loss when compared to Rum.
● Butter Tea does not have a Linked Skill, nor does he activate anyone’s. Rum shares this weakness as well.
● Butter Tea does not have an Artifact, whereas Toso has the option of using hers.

Butter Tea is a Food Soul who is useful for the potent supportive effects that his skills possess. He is crucial in Disaster fights, being a stronger Toso, herself an excellent Disaster fighter. In contrast, he is less useful in Showdown and Catacombs, where crowd control reigns supreme.

When using Butter Tea in Disaster, it is best to give him a Resolute Fallen Angel (Tsuchigumo and Uke Mochi Enhanced are preferred). This gives him more chances at activating his basic skill, which notably grants him even more Atk Spd! However, if he is 0★ and fighting Durga, he might require a Cautious Fallen Angel due to Durga’s damage not being % based.

Since Butter Tea’s most powerful aspect is his skills’ effects, he is not reliant on ★ levels to do his job. However, he still appreciates the boost to Atk, HP and Atk Spd as well as the higher skill level cap that ★ levels provide. However, despite being stronger than Toso stats-wise and skills-wise, if you get better results when using a higher ★ Toso, feel free to use Toso over him.

In terms of damage, Rum has the edge over Butter Tea, whereas Butter Tea has the advantage of having an Atk Spd buff, which can greatly boost the damage output of your other DPS souls. To make things simple, just use the one who yields better results.

Of note is that when Rum comes, she will be a permanent addition to the summon pool, and can be obtained at 2★ through a series of (admittedly rather tough/tedious) permanent missions. As such, do not be disheartened if your Butter Tea is not strong enough or if you simply don’t have him.

While Butter Tea lacks an Artifact, it does not invalidate his strengths, and Toso’s Artifact might not even be able to make up for his stronger skills.

The power of Butter Tea’s skills in Disaster fights seriously cannot be overstated. A 20% Atk Spd buff is very potent with high Atk Spd teams, and a dispelling basic skill is crucial when the bosses possess strong buffs. An energy skill that fills half of everyone’s Energy bars is nothing to scoff at either. Notably, it includes himself, in contrast to Cloud Tea‘s energy skill which excludes herself (in most circumstances).

By virtue of his skills alone, Butter Tea has a strong niche, and any ★ levels that he gets will serve as a bonus that boosts his damage output and further cements his place in your Disaster teams.

Butter Tea will likely be featured in a future summon event with a 1.20% rate, as he had one such event in CN. Even so, he will not be easy to summon and ascend… He is definitely good to get, but should you fail to do so, there are still other options, notably Rum.