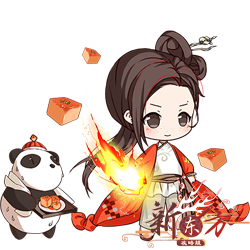 ● Mapo has a high Atk stat and a decent Atk Spd stat, and her skills deal high single target damage.
● Mapo’s basic skill silences enemies, and its damage over time effect makes it stronger than most single target skills. A better version of Peking’s already amazing basic skill!
● Increasing normal attack damage taken by a foe is equivalent to reducing their Def, and a 30% Def reduction for 5 seconds is notably more potent than even Maofeng’s Energy Skill!
● Mapo’s preferred Fallen is Tsuchigumo, which is the strongest Fallen Angel (together with Uke Mochi Enhanced). Being able to have a 20% boost while using the best Fallen is another great addition to Mapo’s résumé!
● Mapo having an Artifact puts her even further above the competition. She is also projected to have a Gate of Trials (as she had one in CN), which makes building her Artifact much easier than for most others!
● Having less Atk Spd than Peking means that when it comes to just Silencing, Peking will do a better job until FAs can make up for the difference.
● Unfortunately, good things don’t come easy, and much like Turkey and Pizza, Mapo’s availability is also locked to a single ranking event.

Mapo, for the most part, is a better version of Peking, the catch being that Peking has a much higher Atk Spd stat, making him stronger at CC until she gets fast enough.

While most Magic and Strength souls have to make do with either being DPS Souls with no CC, or being CC Souls with low DPS, Mapo gets the best of both worlds, being a strong DPS Soul with good CC.

Mapo’s ideal Fallen Angel setup would be a Resolute Tsuchigumo, but if she cannot reach ~18k Atk Spd, give her a Brave Fallen instead, unless you’re using her solely for her Silence, in which case she’ll need all the Atk Spd she can get anyway.

There are presently no Food Souls in the game who can come close to replicating Mapo’s ability to compete with the top DPS Souls while also providing CC, making her one-of-a-kind. As such, as long as your Mapo has enough ★s to outperform Peking, she’ll see use just about everywhere.

Mapo Tofu is an excellent all-rounder FS, with top-notch DPS and good CC. She even has an Artifact, and a Gate of Trials to facilitate its progression!

While her Artifact is not as easy to raise as Turkey’s was, just her stats and basic skill alone make her amazing, so do your best for the upcoming Temple Fair!