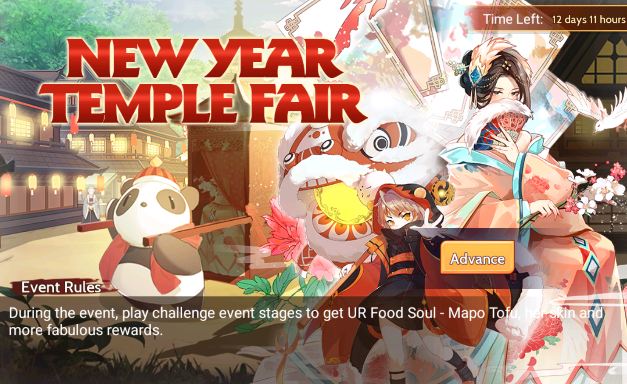 A major event similar to Pizza’s event. It is basically the Carnival event, just repackaged with different theme, images and rewards. Main difference will be the fight, instead of jester and clown king, it will be the Nian Beast. The fight mechanics will be different due to the different skills from the Nian Beast. Notable rewards from this event include Mapo Tofu, Lion’s Head, special frames & avatar, and various consumable rewards.

1. Applies a DoT (Damage over time) to entire team. The DoT can be dispelled, and its damage increases over time.

This is the hardest feature to deal with, as the damage eventually becomes too much for most healers to handle. Ideally, this is dealt with by using a Food Soul who can remove negative effects, also known as a cleanser. Cleansers include Bibimbap, Sichuan Hotpot and Laba Congee. Bibimbap and Laba Congee are healers, which are much-needed due to the intense pressure applied by the Nian Beast. Sichuan Hotpot on the other hand, is a DPS, and while she's not bad, she will take up a slot that may be better used by a pure DPS like Turkey. It is recommended to give your cleanser your best Atk Spd FA, as their ability to cleanse quickly is crucial.

Other ways to counter this feature include using Milt (only if you have Caviar to activate her powerful linked skill) or Bonito Rice with his damage reduction skill.

2. Does skill which deals massive damage to entire team.

The Nian Beast will use this skill at 4 timings in the whole fight.

This is for early-game players, who don't have Milt, Bonito Rice or cleansers. The aim is to use Tangyuan's Linked Skill to avoid the massive damage at the specific timings.

This is a riskier, but potentially more rewarding team for early-game players. Similarly, the aim is to use Miso's Linked Skill at the same time as the massive damage in order to heal back as much health as quickly as possible.

This is a team that is used when one lacks Milt or cleansers. The combined force of Bonito Rice and Miso's Linked Skills are used to simultaneously take on both of the main obstacles. Depending on Bonito Rice and Sweet Tofu's star levels, this might actually be weaker than Team Comp 2.

This team attempts to simply use the power of Milt's linked skill to tank through everything the Jester throws. Milt will likely require a Cautious Fallen Angel.

Those with a cleanser and good Atk Spd FAs to support them can try this team. It relies heavily on the cleanser removing the DoT effect asap, and then letting the other healer handle the timed damage. Recommendations for the second healer include Milt, Sweet Tofu or maybe even Fondant Cake. Sweet Tofu and Fondant Cake requires 3* or more to perform. Laba Congee is best paired with Toso while Fondant Cake with Champagne.

Making use of Beer's overpowered basic skill to dish out high damage. This team requires beer to be in top condition, either with high stars or high atk spd FA, best with both. Good stars and FA are also needed for the healers to keep the team alive. FAs are less demanding on attackers but more demanding on their artifacts. Unless you team’s FAs are at least +13, 14 and up, the team will not be able to survive to the end and probably wipe at the last big skill due to lack of heals. There is some RNG involved so keep trying to squeeze out that extra damage.

This is a team with very stringent requirements. Only recommended with a high Atk Spd cleanser (~20k Atk Spd), and if the entire team has enough HP to withstand the timed damage. If you've passed the requirements, this team might out-damage Team Comp 6 with 1 more attacker replacing Beer.

1. AOE skill, applies a DoT (Damage over time) every 8-9 secs dealing maximum 3% HP damage every tick. Can be cleansed.

The main damage dealing skill to the team. Thankfully, this skill can be cleansed. Thus the food souls recommended will be cleansers like Bibimbap, Laba Congee or Sichuan Hotpot. Bibimbap and Laba Congee are healers in nature, thus can be used to free up a slot for another DPS. Sichuan Hotpot, on the other hand, is a DPS on her own and while she can dish out quite a significant damage in addition to energy boost for the team, using her will take up a DPS slot which can be catered for a better pure DPS like Turkey, Pizza or Champagne. Choose the food soul according to your team comp. Atk Spd FA is also recommended to cleanse the debuff as soon as possible. Another highly recommended strategy is using Pizza with node 1 open. Pizza's artifact's node 1 is able to ignore this DOT, thus freeing up a cleanser role.

2. Applies a 100k damage shield buff to itself every ~20 secs. Can be dispelled.

The main damage reducing skill to the team. This skill basically reduces overall damage of your team. The skill happens every ~20 secs which will result in a total damage reduction of 1100k damage for the whole fight. This can be mitigated with dispelling food souls like Toso, Butter Tea, Rum or Moon Cake. However, good Atk Spd FAs are needed to ensure the dispelling happens frequently enough while not compromising on overall damage. Thus, another good DPS is recommended if the Atk Spd is not enough to dispel fast enough. Do try out both options to gauge the overall damage and find the best choice.

Countering the Nian Beast's other skills

Nian Beast's skill of Atk and Def increases over time is a basic effect of most bosses and just depends on the overall team's condition in level, star etc. The damage is not % based and it not high, thus a tank/defense soul is not required in the team.

For the AOE skill dealing % based damage and instantly killing food soul with 20% or less HP, because there is no major damage after this skill, it is not much of a concern if your healer is fast enough to heal the team through. If not, try a 2 healer build. For players using timed heals like Caviar, Milt, the skill deals 40%, 50%, 60% and 70% damage respectively at these timings:

A basic setup for mid tier players or players with not enough Atk Spd FAs. Main concern is survival and suitable comp for players with Bibimbap 1* or below or Laba Congee 3* or below. If your Bibimbap is at least 3* or Laba Congee 4-5*, you can try out the next team comp. This team runs 2 healers to ensure survival but recommended to try out Miso Soup first for testing if the team can survive. If the team cannot survive with Miso Soup, swap to Sweet Tofu. Attackers given priority to pure attackers like Turkey, Pizza, Sanma etc. However, if Butter Tea or Toso is at least 3* with good Atk Spd FAs, possible to swap out 1 attacker for them and try out their dispelling.

This team just reduces 1 healer from the previous team comp. This allows for 3 attackers plus 1 dispel food soul. This team will be viable with Toso and Butter Tea being the main choices as they can dispel while having substantial damage. Moon Cake is unfortunately ousted because her damage and base Atk Spd is too low. However, Toso and Butter Tea should be minimum 3* to bring out their potential. This requirement also applies to the healer. The healer and dispeller need to have high stars with good Atk Spd FAs, the higher the better, preferably +10 and up.

The ultimate team comp making use of beer again to maximize damage output. As usual the requirements for using beer in the team is very high, requiring good Atk Spd FAs on the entire team, especially for beer and healer. High star for the team is also recommended with beer and healer having at least 3*. Attackers are the usual trinity of Turkey, Pizza and Champagne but can swap one of them with 1 dispeller of either Toso or Butter Tea. Swap around and test the damage because there might be variations of actual team comp and some might do better with or without dispel. For players with Pizza artifact node unlocked, consider using Sweet Tofu if Bibimbap Atk Spd is still too slow to ensure survival of full team at last minute.