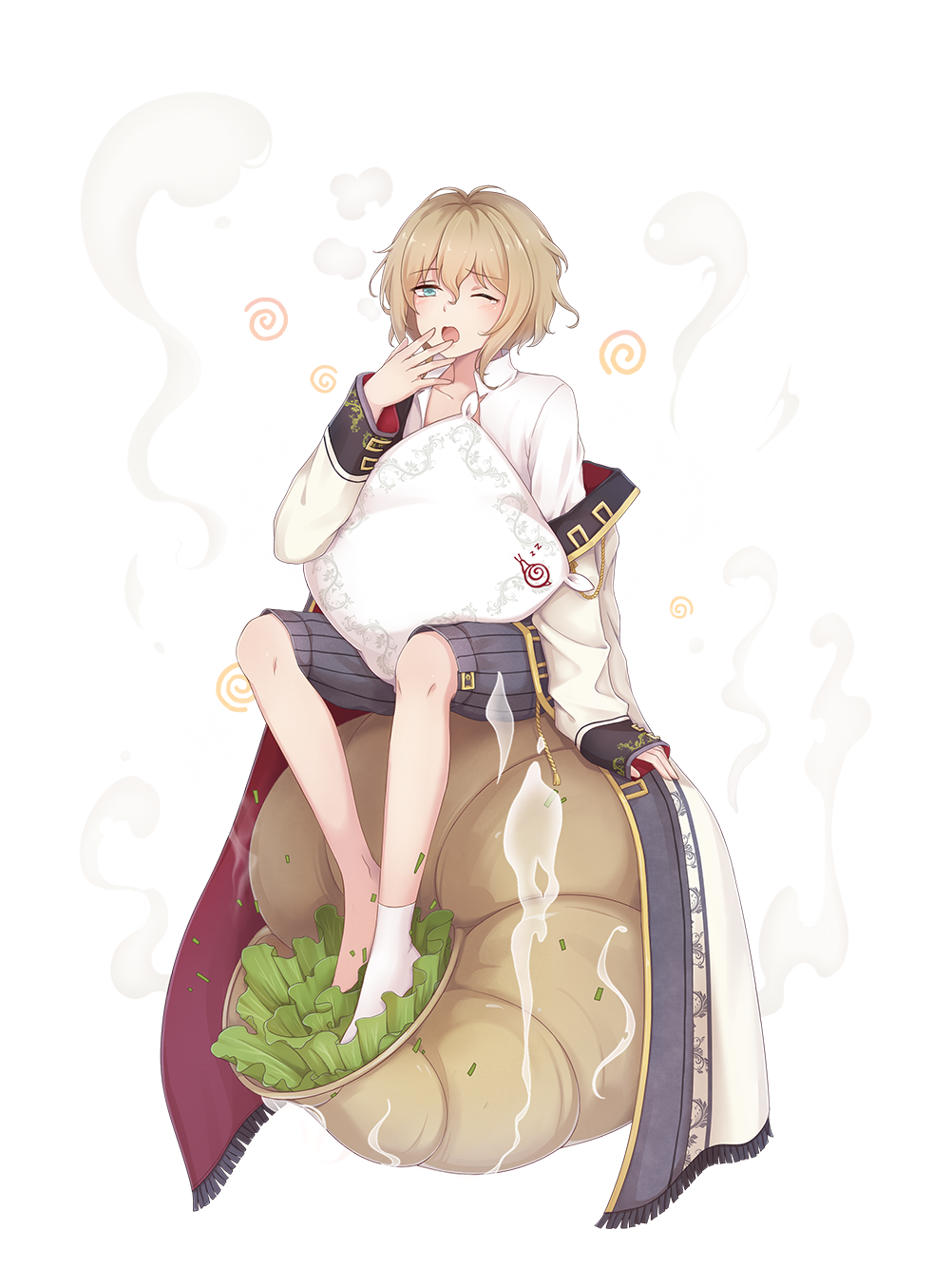 I yawned and stretched.

As I opened my eyes, a man who appeared to be a woodcutter came into view.

He seemed shocked into silence by my presence. I placed my pillow down, adjusted the lapel of my jacket and introduced myself.

"Good day to you, Master Attendant... I am Escargot, please treat me kindly from now on..."

The man remained in shock, staring at me with huge eyes and an expression of disbelief. Suddenly, he came back to his senses and grabbed both my hands in a rush.

I cocked my head, giving him a puzzled look.

I wanted to give him a proper answer, but a sudden wash of extreme fatigue came over me like a tidal wave. My eyelids grew heavier...

Master Attendant was yelling into my ear anxiously. Though I wanted to explain things, the weariness was overwhelming. I didn't even have the energy to stand anymore.

The next moment, everything went black.

When I woke up, Master Attendant was sleeping by my bedside.

"You were worried about me ... so you've been keeping watch over me?"

I felt a twinge of guilt when I noticed the dark circles under his eyes.

Perhaps disturbed by my movement, Master Attendant roused from his sleep and slowly opened his eyes. Realizing that I was awake, he grabbed my hand excitedly again.

"Are you ok? You suddenly fell into such a deep sleep, it really scared me to death. I thought it was because I was incompetent... so..."

Watching him ramble on incoherently, I felt happy for some reason.

Drowsiness has gripped my brain for years, causing my speech and movements to be much slower than others.

As I explained everything to him, the initial excitement melted away from his face and was gradually replaced with a sense of calmness. When I was finally done, he was staring at me with an expression that I could not comprehend.

Master Attendant looked me and asked, "Are you narcoleptic? Do you have sudden, uncontrollable sleep attacks?"

For one brief moment, I thought I saw disappointment play across his face but it vanished as quickly as it had came. It made me wonder if my eyes were playing tricks on me.

I could feel that it was time for me to sleep again as drowsiness began enveloping me once more.

III. Cure If I Can

When I woke up again, Master Attendant was not in the room.

I got up and went to look for him, finally finding him at the back of the house.

He was just standing there, gazing into the far distance with an expression that was mixed with tenderness and remorse.

I wanted to approach closer, but ended up interrupting the moment. Master Attendant turned around and smiled when he noticed me.

"I've got something to show you."

Master Attendant ushered me back into the house. He rummaged through the kitchen cabinets and produced a bag in front of me.

He found a cup and proceeded to pour some kind of powder from the bag. After adding hot water into the mixture, he placed the cup before me.

His expectant face made it hard for me to reject him.

I took the cup of black liquid from him and gave it a sniff. An indescribable aroma filled my nose.

"This is called black coffee."

There was a hint of joyful exuberance in Master Attendant's voice. "It's said that drinking it will make you feel more awake."

I finally understood. Master Attendant was hoping to cure my narcolepsy.

But will this drink work? Even though I doubt it would, I decided to drink it so as not to let him down.

I preferred the sweetness of milk, I quietly lamented.

The bitter liquid flowed down my throat and spread throughout my body. I hope the drink was really as miraculous as Master Attendant claimed it to be, and that it would cure my narcolepsy. After all, with a physique like mine, it can be quite vexing at times.

Master Attendant's face was filled with anticipation, but his tone was cautious.

"Uh... it's pretty effective..." I really wanted to reply him that way. However, my body seemed to sense that something within me was trying to fight the drowsiness. A stronger wave of sleepiness washed over me.

Without a chance to say a single word, I fell into a deep sleep.

Today, I've been awake for the longest time in my life. I stood by my Master Attendant's bedside, not feeling any sense of tiredness.

"You look... energetic today," Master Attendant commented as watched me from where he rested on his bed.

"You look exactly the same as you did the first time I met you... You haven't changed at all... Food souls are truly amazing. Cough cough..."

The present Master Attendant, who used to be so full of spirit and was always clamoring to cure my narcolepsy, was so weak that his voice was barely audible.

I don't know what to say now, to stop the cruel passage of time from taking its toll on him. I stared at his wrinkled face and gaunt frame, knowing that this very moment could be his last.

"Don't look so sad... I'm merely going to a place far, far away..." He attempted to comfort me in a debilitated voice.

Then, he closed his eyes, as if recalling something.

"It's such a shame. I've always... always wanted to save her... But it's heavily guarded and fortified there. I was foolish to think I could do it on my own..."

Perhaps it was a brief moment of lucidity before death's finality. Master Attendant's hoarse voice filled the entire room as I stood quietly and listened to him narrate a long, long story.

When the story ended, his breathing came to a stop.

After Master Attendant's quiet burial, I followed his last words and came to an imposing castle.

Master Attendant had been hoping to cure my narcolepsy so that he could use my power to rescue the 'queen' who was locked up in the castle.

Ironically, neither the coffee nor anything else that he did worked in granting his wish. It was only upon his death that my mind became cleared of the haze, turning completely lucid.

I sneaked into the castle easily and managed to locate the prison from Master Attendant's memory.

"Being locked up in a room like this for such a long time... no matter how strong she is, perhaps now..."

I pondered on the state of the food soul that Master Attendant had spoken of. Feeling uneasy, I pushed against the heavy iron doors.

She was sitting in the middle of the room. She did not look dispirited or misanthropic. Rather, her eyes were calm and her face composed.

"This is the attitude that a powerful person should have," I realized.

"I've come to get you." I quoted Master Attendant's words.

A smile played across her lips.

The Master Attendant who summoned Escargot was once a chef in a majestic castle. Despite being an insignificant little chef, he managed to summon a powerful food soul one day.

The palace royals could not tolerate the idea of a lowly chef having the talent for being a Master Attendant. Hence, they falsely accused him of plotting a rebellion and held him in prison.

The food soul that he had summoned was also placed in shackles.

One night, the powerful food soul attempted to escape from the prison with her Master Attendant, not realizing that they were heading into the trap set by the enemies.

The crafty royals knew right from the beginning that mere chains would not be able to stop them.

Surrounded by numerous soldiers, Chefie decided to sacrifice his life but was immediately stopped by his food soul.

The food soul agreed to give up thirty years of her life in exchange for her Master Attendant's safety.

In the years that followed, Chefie lived in guilt and spent most of his energy summoning his second food soul: Escargot.

However, the second food soul was not as strong as the first. He was even prone to bouts of drowsiness and deep slumbers.

Chefie could not bear to order Escargot to venture into such a dangerous place, so he tried various methods to keep Escargot's hypersomnia at bay.

Fate can be cruel at times. Everything that he did ended in failure. It was Chefie's death that ultimately bought a moment of lucidity for Escargot.

Keeping Master Attendant's promise in his heart, Escargot finally succeeded in saving the food soul who had been trapped in prison for thirty years.

From that day on, the two food souls who had lost their Master Attendant stayed by each other's side and became inseparable partners.