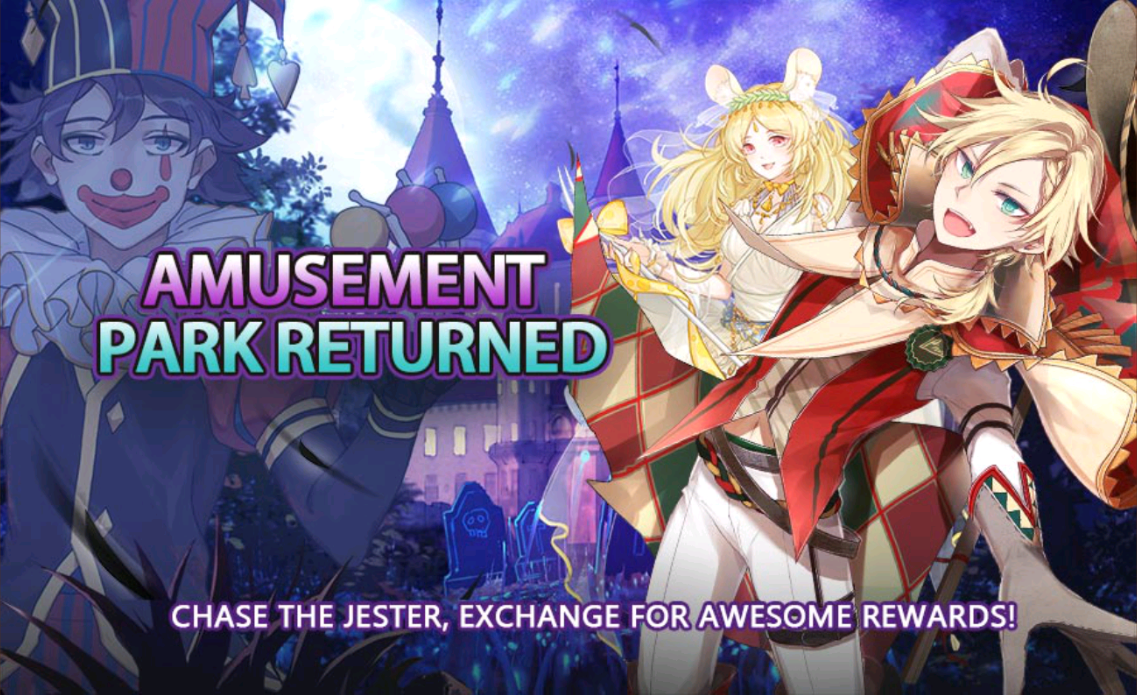 First big scale event in global server. This is a rerun with confirmed changes to rewards. The reward list will be updated when the event goes live. Information below are based on the last amusement park event. Notable rewards from this event include Pizza, Cheese, special frames & avatar, and various consumable rewards.

1. Applies a DoT (Damage over time) to entire team. The DoT can be dispelled, and its damage increases over time.

This is the hardest feature to deal with, as the damage eventually becomes too much for most healers to handle. Ideally, this is dealt with by using a Food Soul who can remove negative effects, also known as a cleanser. Cleansers include Bibimbap, Sichuan Hotpot and Laba Congee. Bibimbap and Laba Congee are healers, which are much-needed due to the intense pressure applied by the Jester. Sichuan Hotpot on the other hand, is a DPS, and while she’s not bad, she will take up a slot that may be better used by a pure DPS like Turkey. It is recommended to give your cleanser your best Atk Spd FA, as their ability to cleanse quickly is crucial.

Other ways to counter this feature include using Milt (only if you have Caviar to activate her powerful linked skill) or Bonito Rice with his damage reduction skill.

2. Does skill which deals massive damage to entire team.

The Jester will use this skill at 4 timings in the whole fight.

This is for early-game players, who don’t have Milt, Bonito Rice or cleansers. The aim is to use Tangyuan’s Linked Skill to avoid the massive damage at the specific timings.

This is a riskier, but potentially more rewarding team for early-game players. Similarly, the aim is to use Miso’s Linked Skill at the same time as the massive damage in order to heal back as much health as quickly as possible.

This is a team that is used when one lacks Milt or cleansers. The combined force of Bonito Rice and Miso’s Linked Skills are used to simultaneously take on both of the main obstacles. Depending on Bonito Rice and Sweet Tofu’s star levels, this might actually be weaker than Team Comp 2.

This team attempts to simply use the power of Milt’s linked skill to tank through everything the Jester throws. Milt will likely require a Cautious Fallen Angel.

Those with a cleanser and good Atk Spd FAs to support them can try this team. It relies heavily on the cleanser removing the DoT effect asap, and then letting the other healer handle the timed damage. Recommendations for the second healer include Milt, Sweet Tofu or maybe even Fondant Cake. Sweet Tofu and Fondant Cake requires 3* or more to perform. Laba Congee is best paired with Toso while Fondant Cake with Champagne.

Making use of Beer’s overpowered basic skill to dish out high damage. This team requires beer to be in top condition, either with high stars or high atk spd FA, best with both. Good stars and FA are also needed for the healers to keep the team alive. FAs are less demanding on attackers but more demanding on their artifacts. Unless you team’s FAs are at least +13, 14 and up, the team will not be able to survive to the end and probably wipe at the last big skill due to lack of heals. There is some RNG involved so keep trying to squeeze out that extra damage.

This is a team with very stringent requirements. Only recommended with a high Atk Spd cleanser (~20k Atk Spd), and if the entire team has enough HP to withstand the timed damage. If you’ve passed the requirements, this team might out-damage Team Comp 6 with 1 more attacker replacing Beer.